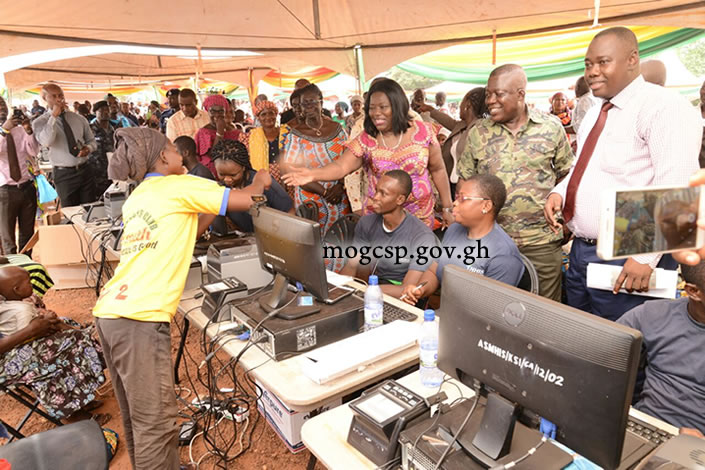 As part of government’s social protection interventions, the Minister of Gender, Children and Social Protection, Nana Oye Lithur has said the government is committed to the holistic development of everybody in Ghana.

She pointed out that one important aspect of the interventions is, government believes that expanding access to quality healthcare is a basic human right and is critical to the overall human resource development.
Oye Lithur was speaking at the free registration of 2,000 head potters popularly known as Kayayei in the local parlance and 500 elderly people onto the National Health Insurance Scheme (NHIS) in the Ashanti Region.

The free registration exercise which was organized concurrently by the gender ministry in collaboration with the National Health Insurance Authority (NHIA), saw some enthusiastic Kayayei and the elderly lining up to be enrolled onto the scheme.

The exercises took place at the Akorem Cluster of Schools Park in AsokoreMampong Municipality, where 2000 Kayayei were registered whiles 500 elderly also got the free NHIS at Adum in Kumasi.

The Minister of Gender, Nana Oye Lithurwho supervised the exercise, stated that the main reason for the exercise was to target the vulnerable and the elderly and cushion them towards their healthcare needs.

According to Oye Lihtur, the free registration of the Kayayei and the elderly was in line with the social democratic principles of the governing National Democratic Congress (NDC), adding that “we are very committed to the holistic development of everybody in Ghana”.

She indicated that the exercise started in Accra precisely at the Mallam Atta and Agblogbloshie markets in December last year with theregistration of some 1,000 Kayaye.

Further, the sector minister said the government recognizes that women and girls who use market centers as their homes sometimes suffer physical, sexual and emotional abuses, and in response to this the gender ministry in collaboration with UNFP has established Response Centres for survivors of gender based violence in two selected markets in Accra; Agblogloshie and Mallam Atta Markets.

On the elderly, OyeLithur said the elderly are also not left behind in the scheme of affairs, pointing out that apart from the free NHIS, they are also enjoying the EBAN welfare card, where they enjoy half the price of Metro Bus fares, and also receives priority by not queuing at bus stations and banks.

She disclosed that the ministry is targeting 25,000 elderly people onto the EBAN, saying so far 10,000 old people have received their cards already whiles the rest would receive theirs soon.

For his part, the regional minister, Mr. John Alexander Ackon who was until recently a former deputy minister at the gender ministry,added that society needs to show more care and compassion to the vulnerable, saying in line with this, the government under the president of John Mahama introduced the Social Protection aspect to the ministry to ensure that such poor and vulnerable people are taken care of by the ministry. “The realignment of the ministry was to ensure social inclusion of all”, he said.

The director of membership and regional operations of NHIA, Mr. Ben Kusipledged the NHIA’s continuous collaboration with the ministry to reach out to more under privileged persons in society.

As part of her tour in the Ashanti region, the minister earlier visited the Bekwai-Amoafo Central Destitute Infirmary and later the Kumasi Children’s Home, where she interacted with the authorities and made some presentations to the two institutions.